When you read cold fusion theories you hear a lot about collective effects, ways that atoms in a solid work together to do things individual atoms cannot. One iron atom cannot be a permanent magnet, but a trillion of them together can be.

Or here’s another example. Two deuterons bouncing around at room temperature do not have enough energy to surmount the Coulomb barrier and fuse. But what if a million deuterons pooled their energy together, spontaneously transferring it all to a single deuteron? Actually this particular example is just wishful thinking. Atoms don’t do that, it would violate the second law of thermodynamics. 😛 I chose this example to illustrate how easily one can dream up collective effects that, upon closer scrutiny, are inconsistent with the laws of physics!

Enough about the Coulomb barrier, one of the two great mysteries of cold fusion. The subject of this blog post is the other great mystery: The branching ratio mystery, a.k.a. mystery of the missing radiation. Here, too, you will hear much about collective effects if you read cold fusion theory papers.

But first a reminder: What is the branching ratio mystery? Well, mainstream nuclear physicists will tell you that when two deuterons collide and react, the result may be:

Basically, when D+D come together, you wind up with two protons and two neutrons and a lot of extra energy (compared to the ground state of helium-4). There is enough energy for one of the neutrons to jump out of the nucleus (the first branch), or for one of the protons to jump out (the second branch). Or, the extra energy can be emitted in an electromagnetic wave (gamma ray), but that’s a relatively slow process; normally a proton or neutron boils off long before the gamma ray photon can be formed.

So much for mainstream nuclear physics; what happens in cold fusion? The most reliable (or “least unreliable”??) cold fusion experiments, as far as I understand, leave little or no trace of neutrons, tritium, helium-3, or gamma-rays, certainly many orders of magnitude less than one would expect from the amount of fusion allegedly going on. Instead, the experiments (allegedly) create a lot of helium-4 and a lot of heat, allegedly in the ratio of ~24 MeV of heat per helium-4 atom. So this obviously contradicts the conventional branching ratio above.

A lot of these collective-action theories are futile for a simple reason. There’s an important constraint on collective effects modifying the branching ratio, and it’s the following inequality:

where d is the distance of a participating particle from reaction center, t is the duration of the interaction, and c is the speed of light.

You need to be careful in defining “duration of the interaction”, but if you do it right, this is about as watertight and inviolable a principle of theoretical physics as you’ll ever see. It comes straight from relativistic causality: “No information or influence can travel faster than light.”

…I am not so reassured! Let’s look again at Eq. (1). As it happens, the gamma-absorption and gamma-emission events studied in Mössbauer spectroscopy have a very long duration! How long? For example, the famous iron-57 Mössbauer isotope has a gamma-emission (and absorption) linewidth of ~10-8eV, i.e. the gamma electromagnetic wave has a frequency spread (bandwidth) of ~2 MHz. As every electrical engineer knows, the time-domain version of this wave has to have a duration of at least (roughly) the reciprocal of that, i.e. >10-7s. (This is an example of the Energy-Time Uncertainty Principle.) So the nucleus is really absorbing that gamma ray over the course of at least 100ns. In that amount of time, light can travel 30 meters. So Eq. (1) tells us there is plenty of time for grillions of nearby atoms to push and pull on the nucleus as it is absorbing the photon, and hence take a share of the momentum.

Back to D+D fusion

Excited nuclear states are not like that. If two deuterons somehow come together within range of nuclear forces, then the amount of time that they are in this embrace cannot be longer than the lifetime of an excited state of 4He. After all, “excited state of 4He” is just another way of describing the same configuration. According to Tilley / Weller / Hale, if I’m reading it right (Table 4.3), the longest-lived excited state of 4He has a linewidth of 0.5MeV, which corresponds to a lifetime of 10-21s, during which time light can travel about 1 picometer (10-12m). So that’s how close something has to be to participate in the D+D fusion. For comparison, the size of a Pd unit cell is ~400pm, and the typical separation between a hydrogen nucleus and its electron is ~50pm. [1pm is roughly the separation between a palladium nucleus and its closest (1s) electrons, though I don’t see how that is relevant or helpful.]

Incidentally, I made this (to-scale!) energy plot: 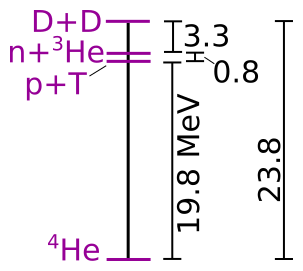 Note that Tilley / Weller / Hale do not list any helium-4 excited states below the level of p+T. That explains why they are so short-lived—a proton or neutron can and will jump right out of the nucleus.

I’ve discussed a number of cold fusion theories on my blog. How do they stack up against Eq. (1)?